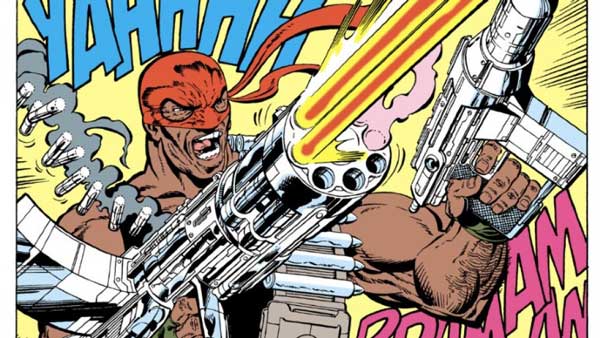 Bloodsport is a super-villain who uses high-tech guns and weaponry with Kryptonite bullets that are teleported into his hands. He is mentally ill and obsessed with the Vietnam War, hired by Lex Luthor and equipped to kill Superman in his deranged state. Alex Trent was the second villain to use the alias, a fanatical racist and member of the Aryan Brotherhood. Since both men have died, a new Bloodsport has taken up the name using the original costume. Bloodsport was created by John Byrne, first appearing in Superman (Volume 2) #4 ,1987.

DuBois got drafted to go to the Vietnam War, but fled out of fear of dying. His brother took his place and was seriously injured. Out of guilt and manipulation from Lex Luthor, DuBois blamed Superman and took on the name, Bloodsport. He wore a device that enabled him to teleport any weapons to himself from an undisclosed location. His arsenal included highly advanced firearms and a gun that shot Kryptonite needles.

Bloodsport… He plays for keeps!

“Bloodsport!” Imagine the death and destruction a sadistic madman could cause if he were able to have any weapon he could think of appear in his hand simply by wishing it to. Well the man called Bloodsport has this ability. Can Superman stop this maniacal killer before more innocent lives are lost? Featuring Jimmy Olsen.