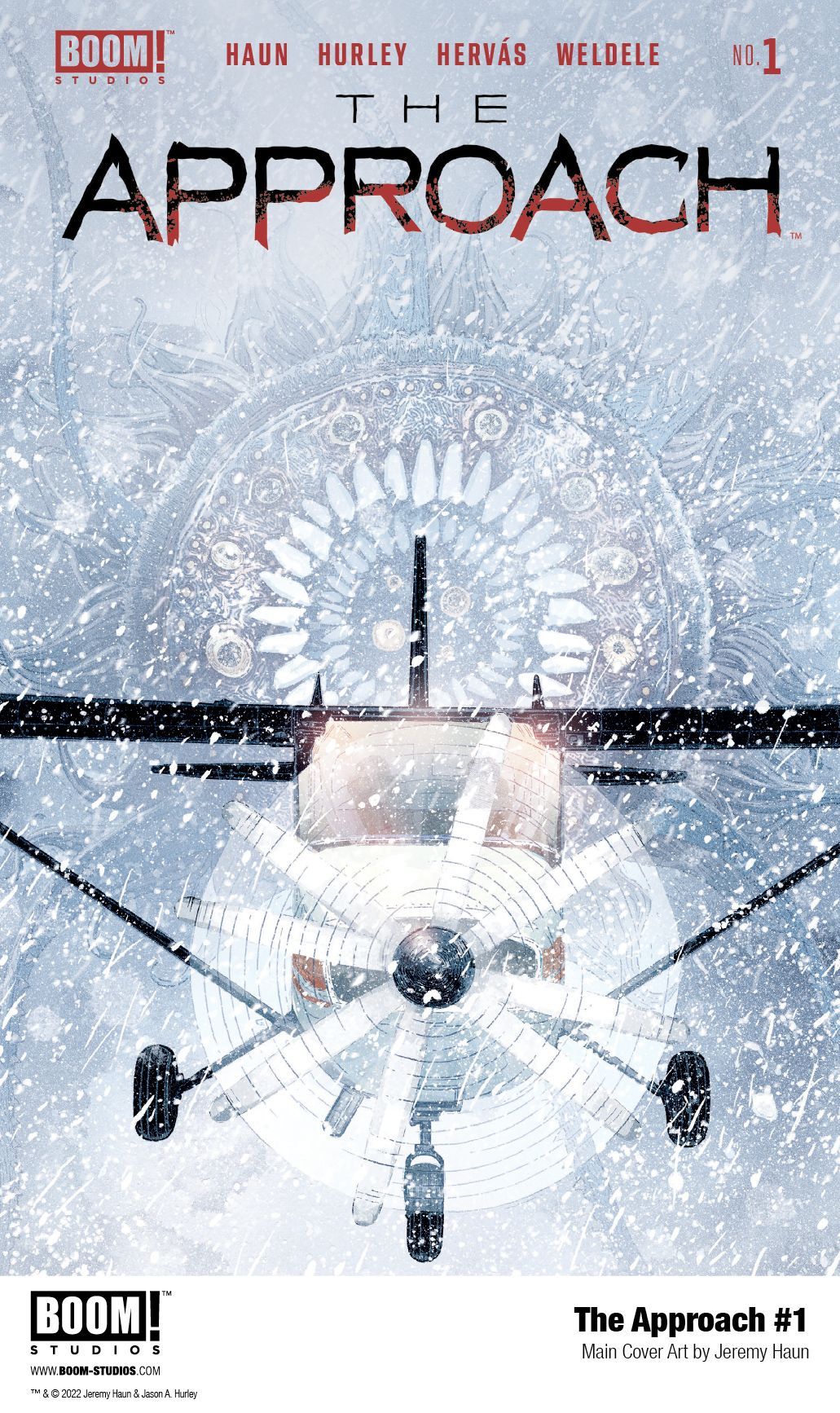 Terror Reigns the Skies in Brand New Horror THE APPROACH #1 From BOOM! Studios

BOOM! Studios revealed today a first look at THE APPROACH #1, the premier issue of a turbulent new horror series from writers Jeremy Haun (The Red Mother, The Beauty) & Jason A. Hurley (The Beauty) and artist Jesús Hervás (The Empty Man), about a missing plane that mysteriously reappears after two decades and brings with it a sinister storm that’s much more than it seems. Available in October 2022.

When airport employees Mac and Abigail find themselves snowed in after a blizzard, they witness a terrible plane crash. After pulling a survivor from the wreckage, they realize a terrifying truth: this plane has been missing for 27 years! The nightmare has only just begun though, as the people trapped in the airport soon find themselves confronted by what this plane actually brought back. For those with a fear of flying, it’s not the sky that deserves dread, but what lies beyond it…

THE APPROACH #1 features main cover art by series creator Haun, and variant covers by acclaimed illustrators Francesco Francavilla (R.L. Stine’s Stuff of Nightmares, Afterlife with Archie), Megan Hutchison-Cates (The Nice House on the Lake), and Björn Barends (Something is Killing the Children).\

THE APPROACH is the newest release from BOOM! Studios’ eponymous imprint, home to critically acclaimed original series, including BRZRKR by Keanu Reeves, Matt Kindt, and Ron Garney; Something is Killing the Children by James Tynion IV and Werther Dell’Edera; Once & Future by Kieron Gillen and Dan Mora; We Only Find Them When They’re Dead by Al Ewing and Simone Di Meo; Seven Secrets by Tom Taylor and Daniele Di Nicuolo; The Many Deaths of Laila Starr by Ram V and Filipe Andrade; Eve by Victor LaValle and Jo Mi-Gyeong; Basilisk by Cullen Bunn and Jonas Scharf; Faithless by Brian Azzarello and Maria Llovet; Alice Ever After by Dan Panosian and Giorgio Spalletta; Grim by Stephanie Phillips and Flaviano, and the upcoming series Briar by Christopher Cantwell and Germán García and Stuff of Nightmares by R.L. Stine and A,L. Kaplan; and Once Upon a Time at the End of the World by Jason Aaron, Alexandre Tefenkgi, Leila del Duca, and Nick Dragotta. The imprint also publishes popular licensed properties, including Dune: House Atreides from Brian Herbert, Kevin J. Anderson, and Dev Pramanik; Mighty Morphin and Power Rangers from Ryan Parrott, Mat Groom, Moises Hidalgo, and Marco Renna; and Magic from Jed McKay and Ig Guara.

Untamed Magics Wreak Havoc in Your First Look at MAMO #3